For those who think I’ve already gone too far with”this vegan thing”, HA, I’m now trying to go raw vegan! Yep, and it’s opened up a whole new world of vegan recipes and ingredients I never knew existed. The coolest thing I’ve found so far is a recipe for fermented cashew cheese and I must say, I’m totally addicted to it. This stuff is amazing!

I’m calling it Odiferous Cheese rather than stinky cheese because odiferous just doesn’t get enough use anymore. Odiferous cashew cheese starts with a plain fermented nut cheese and then you add whatever you want to it: herbs, spices, garlic, finely chopped veggies like onions, lemon zest, peppers or whatever you want. I made a 3-cup batch of the base cheese and then took each cup and made 3 different blends using:

I started with the suggested recipe and then just went hog wild. I have great difficulty following directions without experimenting along the way. I think that comes from my grandma who use to just throw things together all the time. She and I once got into an argument about how much a stick of butter measured out to be but that’s another story altogether.

A note about cheese texture and smell: This cheese resembles those rolls of goat cheese in texture, soft, moist, almost crumbly. It’s not at all a firm slicing cheese, this is spreadable and has a nice stinky aroma but still subtle. Not like a strong blue. This would be perfect for making a vegan version of those cheeseballs my mom used to make at Christmas.

Here’s a photo of the onion/garlic/walnut cheese.

And here’s a photo of the lemon/dill/garlic cheese: 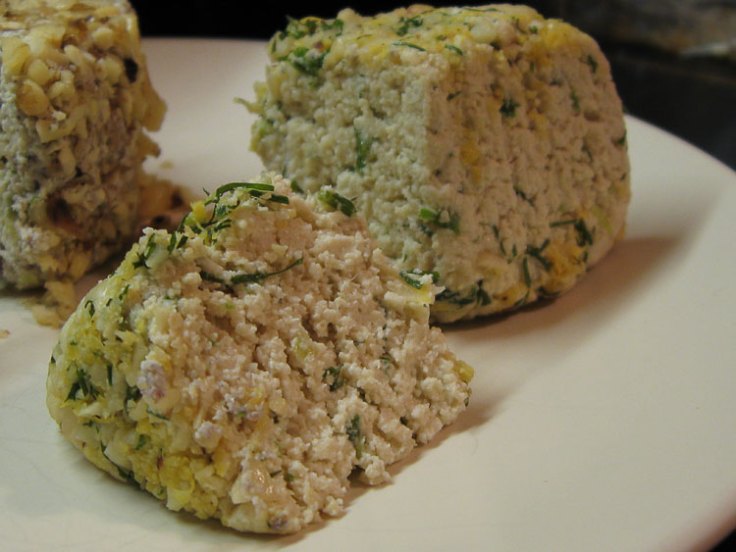 Sorry, the kalamata cheese mysteriously disappeared before I could get a shot.

The base cheese recipe is from The Sunny Raw Kitchen blog, and you really should check it out to see her variations which are different than mine and she has two blog entries about it:

The hardest part about this is making like a Zen master and waiting out the fermentation time (14-20 hours depending on what your hubby has the thermostat set to) but trust me, it’s TOTALLY worth it. DH sets our thermostat down to 64 while we’re at work so I did the fermenting on the weekend when I could keep it at 70 and even then, I placed it near a space heater set on low. My goal was to get it to look just like the instructional photos on Carmella’s blog and make it stinky enough to smell.

I found that freezing the cashew base works very well if you want to store it longer than a few days. I have since made cashew cheeseballs for Christmas and frozen them for traveling to family gatherings.

Notes about ingredient substitutions: I didn’t want to spend 40 bucks on probiotics for the starter so I took Carmella’s advice and used miso instead. I also didn’t want to make my own rejuvelac so I bought some at a health food store. Although it seems easy enough to make, I just wasn’t that inspired. And one more thing, make sure you start with RAW cashews, not roasted ones.

Now, when on a raw vegan diet, you may ask, ‘what do you use for crackers?’ Well, I went looking for firm veggies that would last in my bento lunch box without getting soggy by lunchtime and came back with zucchini rounds. Yep, I just peeled a zucc and sliced it into thin yet sturdy rounds. It was perfect!

Here’s a photo of my lunch box with the zucc rounds and 2 different chunks of the cheese in the upper right corner: one dill/lemon and the other garlic/kalamata.

Total contents of my raw bento:

My DH tells me that all the garlic in the odiferous cheese made me stink for 4 days. He calls me a garlic “carrier”. Pores, hair, etc. It takes a while to completely run its course. So I can only eat garlic when I don’t have any client meetings for at least 4 days. And since I’ve got a meeting Tuesday, I’m off garlic starting this weekend. In the meantime, that cheese is just sitting in the fridge, calling to me. If only I hadn’t used garlic in them.

Now I’m really wanting to try to figure out a way to make an odiferous BLUE nut cheese. With the marbling effect and everything. Wouldn’t THAT be something?! I’ve got some ideas, perhaps I’ll try out this week.