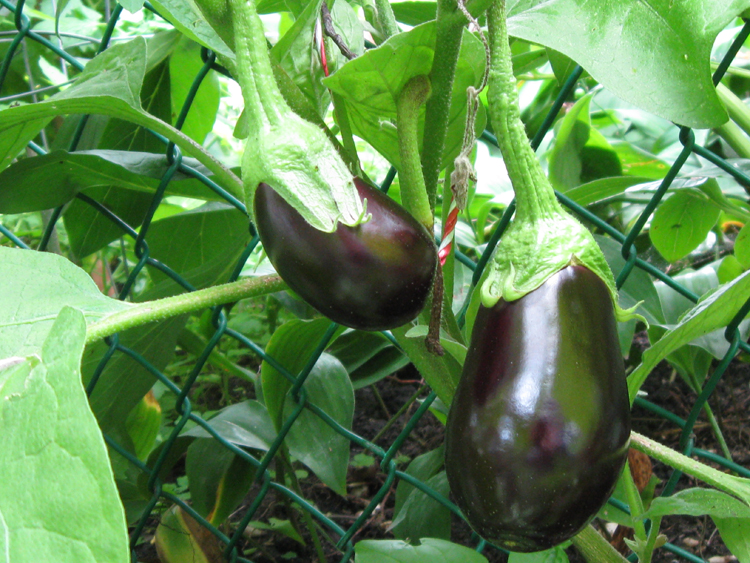 It’s been over a month since my last confession post, and much has happened:

I’ve got over 42 tomato plants and 99.9% of the tomatoes are still green. This summer in Chicago has not been kind to tomatoes: too cool. And tomatoes love heat. I think we may have had about 2 weeks of good heat, at best. I started the tomatoes indoors under lights in March and April and yet, I still didn’t get a jump on things.

I tested several methods for trellising the tomatoes:

The Stupice seedlings I tried failed. They never got over 3 inches tall.

Only about 4 pepper plants grown from seed actually survived. I had to buy pepper plants and many of those were mis-tagged. So rather than having 3 sweet bell plants, I’ve got all long hot skinny things.

Herbs are doing well. Some are planted in an old wine crate and others are planted around the crate. Also planted Borage to attract bees.

Bought two eggplants, different types, one long term and one short. The short term is failing. It sets fruit too close to the ground and they get infested with fruit flies.

The chard is almost completely eaten away by something and yet I’ve found absolutely no Japanese beetles this year. Am told it could be flea beetles.

The strawberries I bought took hold and rooted well, I just need to make a cover/cage for them so the critters don’t get all the fruit. Or having DH make a cage cover is a more accurate statement. The alpine strawberries I tried to start from seed totally failed.

After the initial sunny spring, before the trees filled in and the sun got higher, we had good sunlight on the fabulous deck planters that DH made. Unfortunately, no sooner than I planted them, the sun moved and nothing grew. We will have to seriously trim the trees to try to get more sun. AND staple chicken wire to the tops so squirrels can’t dig.

About that chicken wire solution: it works really well but there are tricks. It works best if your container is wood and you can staple the chicken wire to the top edge of the planter. Then trim the wire flush. And I’ve tried two different planting methods, one where I filled the container to the top with dirt so that all I had to do was scatter seeds over the chicken wire and the seedlings grow up through it. The other where I cut holes in the chicken wire for transplanting seedlings worked best if I kept the holes small. I had a few that were too large and the squirrels managed to dig around the seedlings. Trying to affix chicken wire to ceramic or plastic pots was next to impossible. I did it but it’s not very secure and is very messy looking. Also, the wire could spin around and lop off the seedlings if not careful.

I haven’t had a lot of success with spinach, parsnips, carrots, melons or squash. The spinach never sprouted and I tried various methods including refrigerating the seeds, soaking the seeds and sprouting under lights. Not sure what else to do but I’m going to try again this weekend.

The asparagus seems to be taking root. Hopefully, in a few years, I’ll have some great harvest.

Mache never really took off. Had some sprouts but nothing too big. Will try again for Fall this weekend.

Almost all my squash and melon seeds started but most failed when transplanted. I attribute it to the soil difference along the sidewalk versus in the middle of the yard. The neighbor poured a new sidewalk a couple years ago and the soil on my side of it is now hard gray clay. Nothing grew there but weeds. I’ll have to hand till some amendments into it as well because his sewer clean out is on our side of the fence. Can’t really use a tiller in the area I don’t think. So next year, all squash get planted in the main part of the garden.

The corn is doing great at the community garden. I went by today and I now have both tassels and silks. Some silks look like they’ve already been pollinated so I think we may actually get corn.

Beans, beans, beans, the more you eat, the more they grow. No shortage of beans and they seem to be the best thing for the chain-link or chicken wire fence.

I did plant garlic cloves early in the season to ward off pests from the tomatoes. It seems to be working decently. While there are a few aphids here and there, there’s by no means a major infestation. I will plant more garlic in the fall for spring harvest.

Oh, and nasturtiums are doing well inter planted among the cabbages.

The parsnips never sprouted when direct seeded. They ONLY sprouted when kept for 1 to 2 months in wet paper towels then transplanted when the little main root appeared. Next year, I’m going to do the paper towel method but start them in February.

Carrots just don’t like me. I’ve planted 2 packets of 2 different types and got 3 to sprout. Not sure what to try next on those. Maybe skip it since they’re cheap at the grocery.

Oh, one more thing that I haven’t had much luck with are spring onions. I’ve planted 3 varieties in May and although they did sprout, they’re still Barbi sized.

I never did plant the straw bales like I wanted. DH was so incredibly grossed out by the idea of vegetables growing in straw bales that I didn’t do it.

Lessons Learned for Next Year

Overall, I’m very happy with the effort this year. BUT next year, must get started earlier and plant less. And maybe install some bigass mirrors to reflect the sun blocked by the trees and my neighbor’s garage onto the garden. Of course the annoyance factor would only be a bonus.

7 thoughts on “The Big Green Beast”