How to restore an old and grody cast iron skillet.

[PHOTO NOTES: I’ve saved images very large so you can click on them to see the details close up. It’s important that you understand the textures of the cast iron during the shopping and restoration process. If you want to use these photos, please contact me. Thanks, Julia]

For a while now, I’ve been wanting to add a couple cast iron pans to my kitchen for 3 reasons:

But I just wasn’t finding any in the Goodwill stores I frequented, on Craig’s list or Freecycle. Then one day, @snappyjdog tweeted that she scored a vintage pan at a local antique store and that they had more! Oh groovy groovy groovy! So I did my Google research into old cast iron brands to make sure I knew what I was looking for and headed over to buy my first cast iron skillet. Yes, I was 47 before adding cast iron to my kitchen.

Then you’ll never guess what happened! My SIL sent me two more cast iron skillets she had lying around unused. So now I have a great set of skillets in three different sizes! I am sooo stoked!

TIP on buying old skillets: Sometimes old cast iron develops cracks, usually as a result of abuse. You won’t likely be able to see any crack due to the accumulation of seasoning so the only way to test is by sound. Dangle the skillet by the handle and rap it with your knuckle. It will either ting like a bell or sound dead with a slight buzz. Guess which has the crack?

Now I had to decide what to do next.

After reading up on old pans, I quickly realized I had to first restore this pan then start the seasoning process all over because I did not know the history of the pan. For all the antique dealer or I knew, it coulda been used as a drip pan under a car in someone’s garage. No way to know for sure.

So what comes next is not necessarily environmentally friendly but I figured since I’m only doing a couple of pans I wouldn’t beat myself up over it. But I’d recommend that if you’re going to be in the habit of restoring a lot of cast iron, you should come up with a more environmentally friendly and safer method than this. There are a lot of folks who swear by burning off the old seasoning (there are others who say that’s a bad idea) and there are other cleaning products like Simple Green® (although I have no idea if it works) but I couldn’t find any of them in my area so I went with Easy-Off® oven cleaner.

And for future cleanings after cooking:

A note about rust. Easy-Off will not rust the pan. It may look like it’s immediately making rust when you spray it on but on my pan, that was the crud starting to loosen and there was some old rust on the pan that the Easy-Off removed as well.

What’s happening during the seasoning process: Heat opens up the pores of the iron, allowing the fat to enter. Cooling closes the pores, leaving you with nature’s best non-stick surface. The surface is now also rust-resistant so long as you don’t soak your pans in dish water. If you’re a soaker kinda person, cast iron is not for you.

Note about Crisco® shortening: While Crisco is now vegan, it’s still not as healthy as olive or canola oil. I have read a lot of websites that use oil for seasoning and those that adhere to the tried and true Crisco. I haven’t tested each fat to see if there’s a difference in seasoning quality because that would involve having two identical skillets to test, which I don’t. The sites that suggest using Crisco do so because they feel it provides as superior non-stick surface, so that’s what I used. But if you try it with oil, please let me know how it worked for you.

So how to clean cast iron after cooking with it?

Stuff you should buy:

Benefits of cooking with cast iron:

Oh man, where to start? There are so many reasons to use cast iron, we could write a book. But it really boils down to two key benefits:

Superior cooking: There’s nothing like a heavy cast iron pan to give your corn bread that perfectly browned crust. It heats fairly evenly, retains heat really well and develops a safer non-stick surface than those chemical surfaces that shan’t be named. You can use it at higher temperatures than Teflon® surfaced pans and it won’t burn. Just as with a wok, you really can’t kill your cast iron skillet unless you took a blow torch to it, dropped it from a significant height or ran over it with your car. Even if you found your husband used it as a drip pan under his Harley, you can salvage this pan.

Nutrition: Take a look at these quick numbers for some of my favorite foods.

In 1986, the Journal of American Dietetic Association‘s 1986 conducted an extensive test of the affects of cast iron on some of the foods we eat. Read this awesome page to learn more about how this test was conducted and see a longer list of tested food items.

For folks like me who have always been borderline anemic, this is a health boon. You also don’t have to use as much fat as with other pans while cooking because its well-seasoned surface becomes a good non-stick surface.

Obviously, if you have issues with iron toxicity, cast iron cooking is not for you.

Brands to look for when shopping:

There actually are books written on this topic. One of the best experts in the field is The Pan Man. This guy IS…The Man. He’s the expert. There are others who know an awful lot though including Black Iron Dude. Here’s a brief run down of the primary cast iron cookware brands:

Griswold: This is the Rolls Royce of cast iron cookware, if you can find an authentic piece and not a reproduction or fake. These go for HUGE bucks on eBay and Craig’s List but you’d find better deals at estate sales, garage sales or perhaps antique shops. If you Google “Griswold cast iron”, you’ll find a ton of background info such as what the logo looks like at various stages in the company’s lifespan and that Griswold was eventually bought by a competitor, Wagner. True Griswolds are no longer made and newer cast iron is not made the same way as the stuff your great grandma used. The older iron was reportedly of a different ore, was lighter in weight and thinner than today’s models, and was hand worked after casting to create a VERY smooth cooking surface. Do your research before shopping so you can better identify the age of any Griswolds you run into. More than likely you’ll run into Griswolds made between 1897 and 1957 but the older “Erie” pans from 1865 to 1909 are reportedly some of the best.

Wagner Ware: Wagner was a competitor of Griswold in the 1800s through the early part of the 1900s and made a very fine product. In fact, you’ll find that there are basically two camps of cast iron aficionados: Griswoldites and Wagner Warers. IMHO, it has as much to do with the individuality of the pan since they were all hand made and the seasoning. From my not-very-in-depth research, Wagner Ware seems to be available for less than Griswold. Incidentally, you may run into pans that are stamped with both Wagner and Griswold trademarks. Collectors don’t really care for these pans as they were made after Wagner bought Griswold. Likewise, if a Griswold pan contains the cross logo WITHOUT the “Erie” imprint, it was also made by Wagner.

Lodge: Another very old American company, Lodge reportedly made great products for years but it seems to me they’ve stopped with the individual handwork on the cooking surfaces of pans. The current Lodge pans you’ll find in stores have a rougher texture and are likely to be part of their Lodge Logic line that is pre-seasoned. The pre-seasoning can be removed using the same restoration process I’ve outlined above if you prefer to create your own surface.

Unmarked pans: Even Griswold made a number of unmarked pans so if you see one, check its weight and surface quality before deciding against it. It could be anything if unmarked but if it’s smooth rather than bumpy, finely made, thinner walls, it may be an older model that will be a wonderful addition to your kitchen.

Here are some photo close ups to show you what to look for when perusing antique stores. I left the main images insanely huge so you can see the different textures, just click on the photo to enlarge full size. 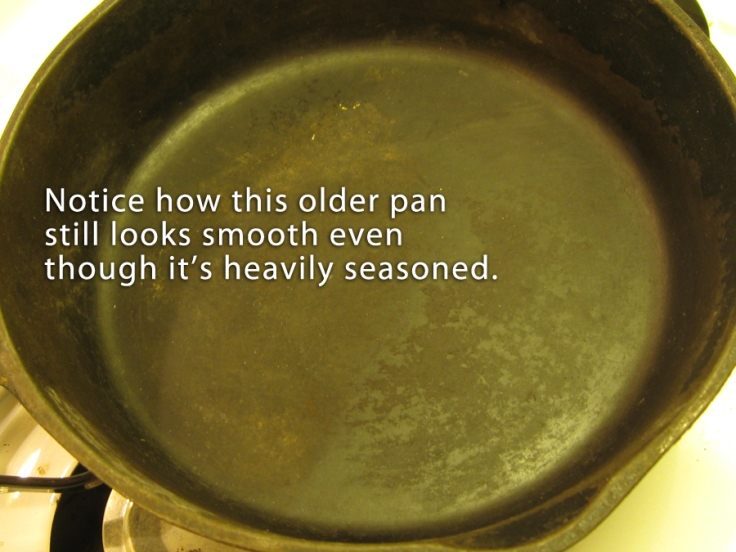 There are other brands but Griswold, Wagner Ware and Lodge are the big 3 that keep coming up in Google searches. And we haven’t even thought about discussing enamel cast iron like Le Creuset — a whole other category for sure.

So go shopping, keep your eyes peeled, don’t forget to check for cracks and you could make a tidy side business out of reselling antique cast iron to chefs who are always on the lookout for the good stuff.

36 thoughts on “How to restore an old and grody cast iron skillet.”